This gallery is for works by Jonathan Sainsbury.

Jonathan Sainsbury was born in Stratford-upon-Avon in 1951. From the age of about 4 he was fascinated by birds which he had found. He started to paint and draw at an equally early age, but at school artistic interests were not encouraged. After leaving school he entered the Byam Shaw School of Painting and Drawing in Kensington.

He later visited Japan, where he became interested in colour wood-block printing. After returning from Japan he entered Leeds College of Art where he obtained an Honours Degree in Fine Arts.

He subsequently travelled extensively in the Far East, visiting India, Thailand, Kashmir and Malaya. In the Himalayas he had an unrivalled opportunity to study and pain exotic pheasants and many other birds and animals.

On returning to England he specialised in watercolours of the Warwickshire countryside in which game birds and his own Springer Spaniels frequently appeared.

He has travelled extensively in Scotland in search of Ptarmigan, Blackgame, Capercaillie and Red Grouse. He sketches extensively in the field, and has sometimes braved semi-blizzard conditions in order to study Ptarmigan in their white winter plumage. Several highly successful prints have been published of his Warwickshire subjects.

Jonathan Sainsbury lives in Stratford-upon-Avon with his wife and two Springer Spaniels.
Back 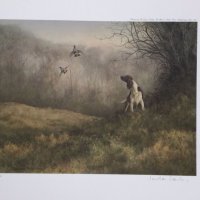