This gallery is for works by Frank McCarthy. Born in 1924 in New York City, Frank McCarthy has been drawn to the West ever since he read Will James novels as a boy and was excited by N.C Wyeth’s illustrations in classics such as Robin Hood and Treasure Island. His formal education was acquired at Pratt Institute and the Art Student’s League where he studied under the eminent painters George Bridgeman and Reginald Marsh. A successful career in commercial art and illustration followed, including book covers for major publishers and advertising art for movie studios and large corporates.

The lure of the west was strong, however, in 1974, McCarthy settled in Sedona, Arizona, where he has blazed a trail of accomplishments ever since. He is a member of the Cowboy Artists of America; has had retrospective shows at the Museum in Shreveport, Louisiana; and exhibits his paintings in galleries in Dallas and Sedona. Articles about his work have appeared in many national magazines, and his book The Western Paintings of Frank C. McCarthy (Ballantine Books, 1974) is in its fourth printing.

A major achievement of Frank’s was the publication, by Greenwich press, of a limited edition, deluxe, signed and numbered book of seventy-six of his paintings. The book met with solid critical acclaim and was quickly bought up by his collectors.
Back 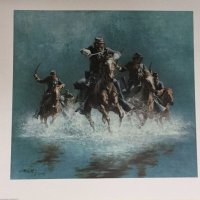 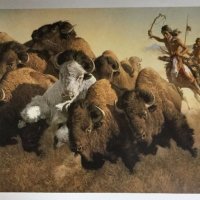 In Pursuit of the White Buffalo